Princess Emmy to Reign on DVD and Digital

Princess Emmy is a young girl with a secret gift – she is the only one in the Kingdom of Kandis who can speak to horses. Up until now, life for Emmy has been wonderful: exploring and hanging out with her best friends – a stable full of horses, spending time with her family at the castle and not having a care in the world.

That is, until her jealous, scheming cousin Gizana appears, challenging her at every turn, threatening Emmy’s chances of becoming an officially inaugurated princess and generally making her life hell.

And on top of all that, Emmy must undergo the ultimate test to earn the right to keep her gift. If she fails, she loses the gift and her best friends forever. There is a huge amount at stake for such a little girl. 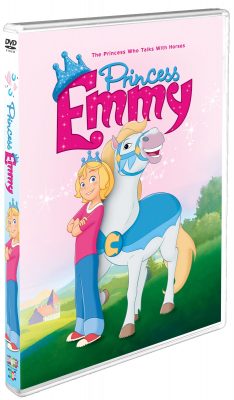 This heartwarming movie is available for purchase on October 15.   You can pre-order Princess Emmy on DVD at Shout! Factory, Amazon or your favorite outlet for digital releases.

Giveaway Open to: Canadian and US Residents, except where prohibited