Have you ever looked up the meaning of your name, your parents, or even your kids?  You can have a lot of fun thinking up family/friends names, finding out the meanings and trying to make a connection between the two. For example take my name Laura.

Feminine form of the Late Latin name Laurus, which meant “laurel”. This meaning was favorable, since in ancient Rome the leaves of laurel trees were used to create victors' garlands.  The name was borne by the 9th-century Spanish martyr Saint Laura, who was a nun thrown into a vat of molten lead by the Moors. It was also the name of the subject of poems by the 14th-century Italian poet Petrarch.

That's the fun of baby name meanings – parents make naming decisions based on many, many different reasons, including family traditions, religion, culture, uniqueness and it just sounds really nice.  But – in the Western world – we rarely do any real research into the history or real meaning of baby names.  So when the poor/lucky child finally finds out the meaning of his/her really nice sounding name, the results can be interesting, ironic, unfortunate or just sometimes hilarious.

Baby Names That Work! With a look at origins & meanings walks you through the origin of names and gives you a glimpse into how names were chosen, given or handed down from generation to generation.  But all names have meaning and sometimes that helps in choosing the perfect name for the new little bundle of joy in your life. 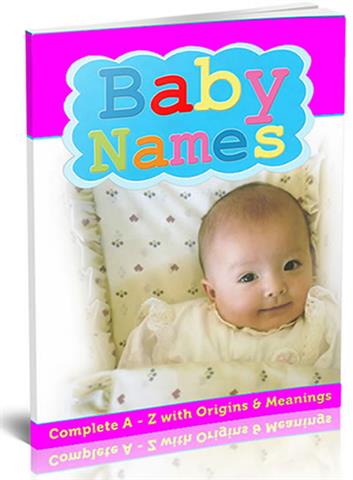 Baby Names That Work! With a look at origins & meanings

Do you know what the most popular names were through the years?  In the book they've broken down the top 10 popular names from the 1940s until now.  Find out if you are thinking original, old school or going with the popular name.  Did you know that Michael was a popular name form the 1940s into the 2000s?  Or that Sophia was the top name in 2011 and 2012 for girls and in 2013 fell to 4th most popular?  It is funny the little facts you can learn from a fun book like Baby Names That Work!

Inside the book they take you through the whole baby name processing and so much more, a peek at the table of contents includes:

Get your copy of Baby Names That Work! With a look at origins & meanings and pick your favorite baby name.

Brought to you by Baby Names That Work!